GLOSSARY of terminology related to anisotropy

Anisotropy is the property of being directionally dependent, implying a variation of certain physical properties as a function of direction.  It is the opposite of isotropy, that is, possessing exactly the same properties in whatever direction one looks.  Here we are mainly concerned with two potentially anisotropic properties of the measured X-ray diffraction data: the diffraction limit (also known as the 'resolution limit'), and the attenuation of the diffracted intensity due to thermal motion and/or disorder.

Beyond the diffraction limit of the sample, the merged intensities of unique reflections fall, on average, below the level of statistical significance and should therefore be considered to be non-informative (inclusion of such data in further procedures, scaling in particular, may in fact be positively detrimental).

The statistical significance of the intensity data after merging is commonly expressed as either the value of the mean signal/noise ratio I/σ(I), or the half-dataset correlation coefficient CC½ [1], computed in spherical shells of reciprocal space.  The statistical significance, in whatever form one chooses to express it, is used as a criterion for applying a diffraction cut-off to the reflection data that should match the diffraction limit as closely as possible.  Clearly if the applied diffraction cut-off falls inside the diffraction limit, then useful data containing information about the structure will be lost; if it falls outside, then uninformative data will be kept. 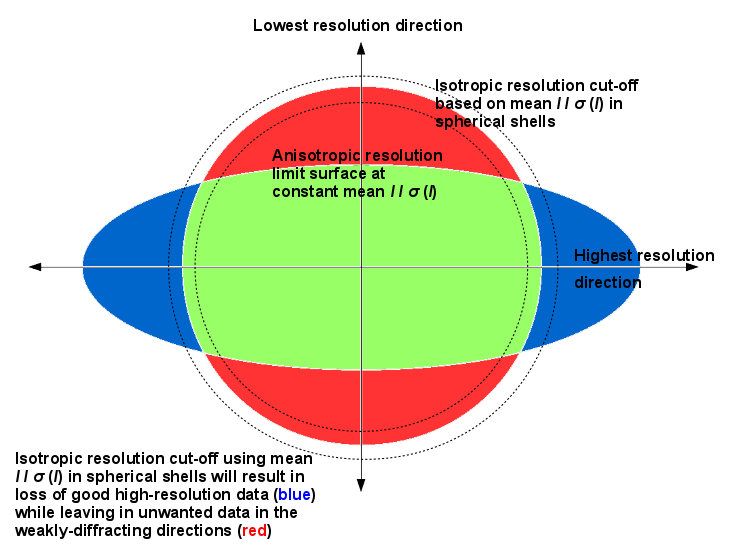 Note that it is not assumed that the shape of the anisotropic cut-off surface is an ellipsoid (the contours in the first figure below are clearly only very roughly ellipsoidal).  The principal cause of distortion of the diffraction limit surface away from a perfect ellipsoid is the variation of the reflection redundancy through its effect on the σ(I) values of the merged data (i.e. inversely proportional to the square root of the redundancy), and therefore on the mean I / σ(I).  The variation of redundancy in reciprocal space is largely arbitrary, being a consequence of both the experimental setup and the data collection strategy (whether a standard protocol or a deliberate user choice).

However, for the purposes of estimating the diffraction limit as a function of direction an ellipsoid is fitted to the anisotropic cut-off surface.  Measured data with d* greater than the largest semi-axis length of the fitted ellipsoid are considered to be outside the anisotropic cut-off surface.  Then all measured intensities (excluding any systematic absences) that fall inside this anisotropic cut-off surface are considered to be 'observed', that is they are included in the reflection statistics and are written to the reflection output file, while all those that fall outside are 'unobserved' and are not used further.  Unmeasured data (except systematic absences) that fall inside the fitted ellipsoid (for example in a cusp) are deemed to be 'observable' (i.e. they had the potential to be observed if only they had been measured), whereas those unmeasured reflections falling outside the fitted ellipsoid are deemed to be 'unobservable' (i.e. not worth measuring). 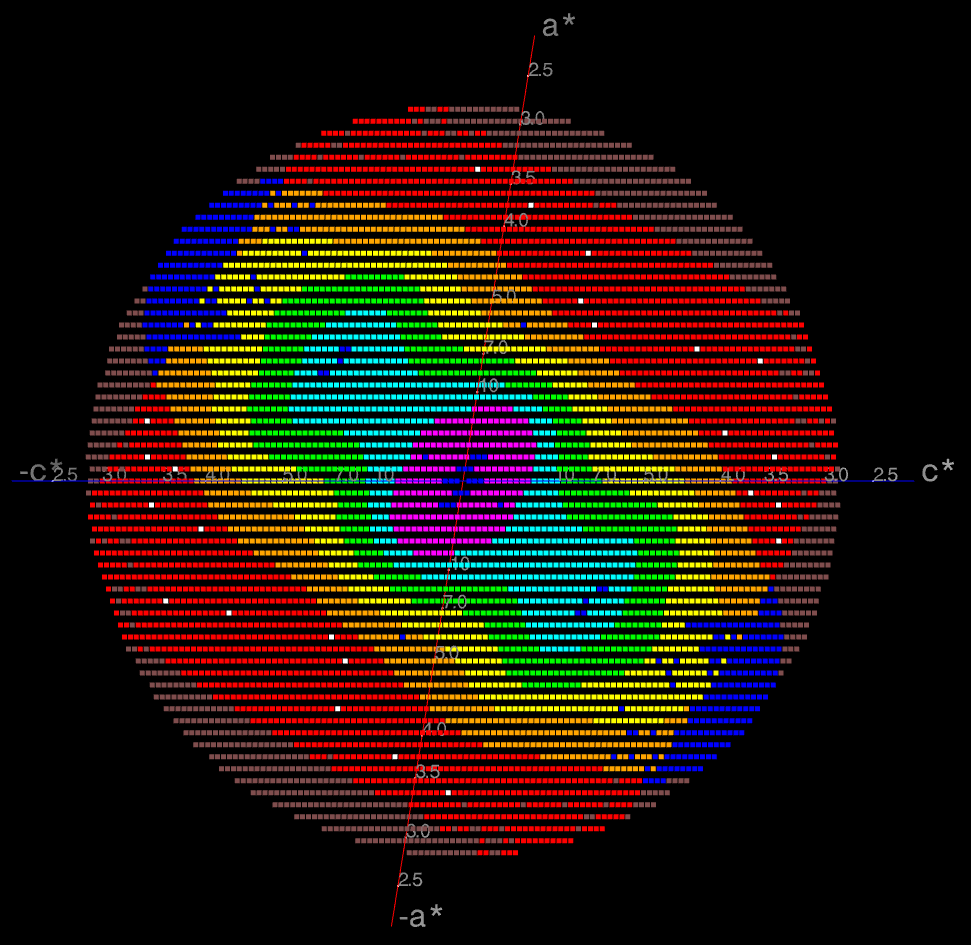 An example is the (h0l) zone of a diffraction pattern shown on the right: the space group is C2 in the conventional IUCr monoclinic setting with β nearest to 90o (β = 99o).  The local mean value of I/σ(I) is color-coded for each reflection within the limiting sphere of measurement.  Representing unmeasured reflections, pink points are 'unobservable' (i.e. expected to be unobserved), whereas blue points are 'observable' (i.e. expected to be observed had they been measured).  Representing measured reflections, red points are unobserved data with their local mean I/σ(I) falling below the default significance threshold of 1.2 (a white point in the red region is an unobserved reflection with individual intensity measured above 3 times its own σ).  The other colors for measured and observed reflections represent successively higher values of the local mean I/σ(I) in increasing value: orange, yellow, green, cyan, magenta, white.

The data are clearly highly anisotropic with the principal directions of the anisotropy in this case lying along the [-1,0,1], [0,1,0] and [1,0,1] directions.  STARANISO deals optimally with this situation by truncating only the red regions (i.e. also removing the embedded white points).  Incidentally, it can be seen that there is some truncation of significant data (orange points) by the edges of the detector in the top left and bottom right quadrants shown by the 'caps' of unmeasured blue points inside the fitted ellipsoid (data courtesy of Esther Ortega and Jose M. de Pereda at the Instituto de Biología Molecular y Celular del Cancer, Salamanca, Spain).

The attenuation of the diffracted intensity

The attenuation factor is taken to be relative to that of a spherically-averaged model of an ensemble of similar structures [2], after correction for symmetry enhancement in certain zones [3].  This is commonly expressed as the Debye-Waller factor T(s) (also known as the 'temperature factor', though this term is deprecated since the effect may be only partly due to thermal motion, and there may be a major temperature-independent contribution arising from disorder):

where s is the scattering vector and U is the overall anisotropic displacement tensor, normally expressed as a second-order tensor (i.e. containing only quadratic terms in the displacements) [4], [5].  Equi-value contours of the Debye-Waller factor are therefore ellipsoids that conform to the Laue-class symmetry.  Note that there is no distortion of the ellipsoidal contours by variations in the reflection redundancy, since the latter has no systematic effect on I, only on σ(I).  It is assumed that deviations from that symmetry (mainly due to anisotropy of the illuminated volume and absorption) are taken up by the batch scale factors during scaling. 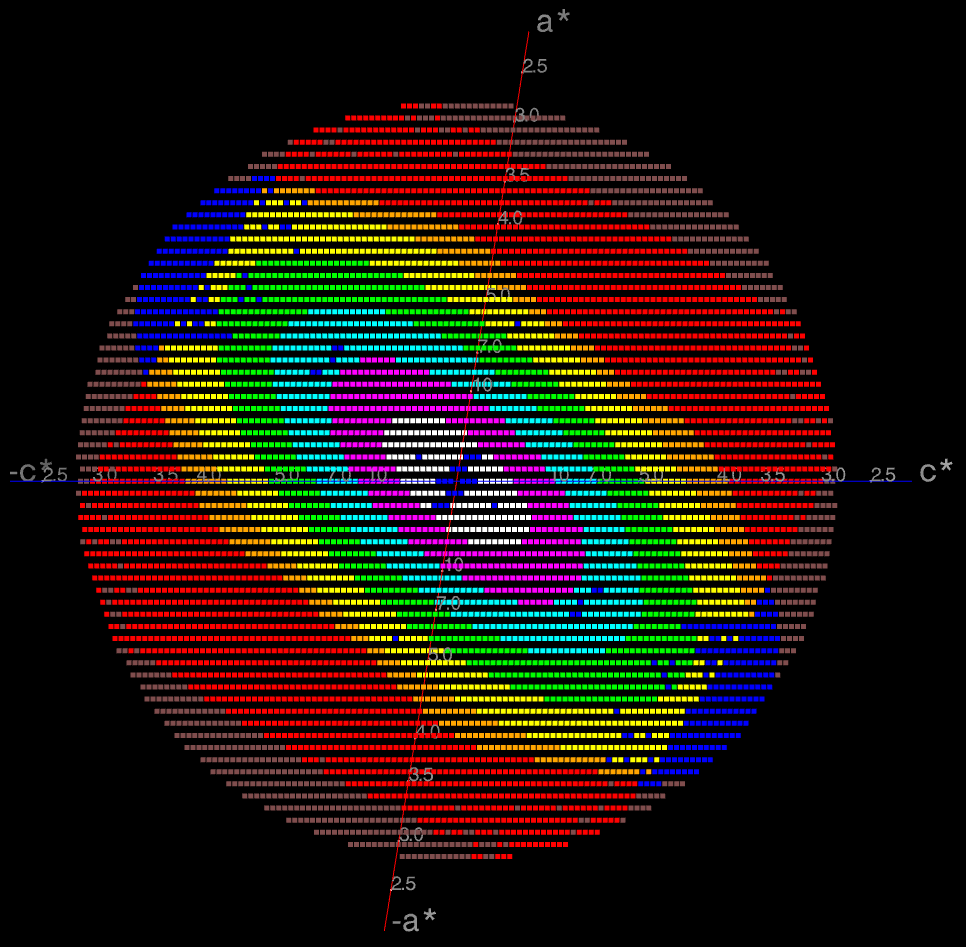 The inverse of the square root of the Debye-Waller factor is applied as an anisotropic correction factor to the amplitudes after Bayesian estimation from the measured intensities and their standard uncertainties.  The method is that of French & Wilson [6], except that it uses an anisotropic prior distribution of the expected intensity, calculated from the Debye-Waller factor for each reflection, instead of the isotropic prior originally proposed.  The anisotropic correction factor is adjusted by subtracting the smallest eigenvalue of the overall anisotropic displacement tensor U from the diagonal elements of U.  Thus, no correction is applied in the direction of the eigenvector corresponding to the smallest eigenvalue of U (i.e. the direction of least mean-square displacement), and a multiplicative correction factor > 1 is applied in all other directions.  The corrected amplitudes therefore decay isotropically at high values of d*, at the same rate as those in the direction of strongest diffraction.  In other words, the data in the weaker-diffracting directions are sharpened so as to decay at the same rate as those in the strongest-diffracting one, with the latter remaining unchanged.